Michael Booth and Sonni Honscheid successfully defend their championship at the 2019 Carolina Cup on April 27th in Wrightsville Beach, NC. The 9th annual Carolina Cup continues to be one of the marquee races in the world that showcases all levels of competitors, three races and Juniors races.  This years event was the 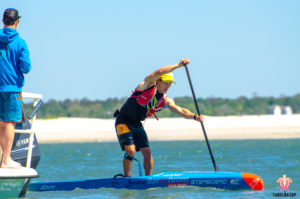 Michael Booth was closely pursued by the Brothers Hasulyo, Bruno second and Daniel third, established great strategy and stretched his winning margin to 2 minutes.  There were several chase packs hoping to work their way up to the lead group, however it was too much, too late to catch the powerful Australian on his Starboard.  Conditions were much more calm then in years past with a North West wind that comes off the land keeping the ocean side smooth and allowing the Graveyard competitors to power their way through the course.  The biggest help to the Men’s competitors was approximately 7 miles into the race when a large yacht came through the inner coastal at high speed giving some of the chase groups large wakes to ride and gain on some of the competitors in front of them.  While this is not illegal since the competitors did not sit behind another craft and draft, they are able to use and ride any wakes or waves to maximize their speed and limit their energy.  The race committee does not have control of these outside agencies.  While many chase packs had the same chance to utilize the wakes, it still takes the knowledge to best use them to your advantage.  Mo Freitas was one that greatly benefited from the wake allowing him to move up from about 23rd place and finish in 9th overall. 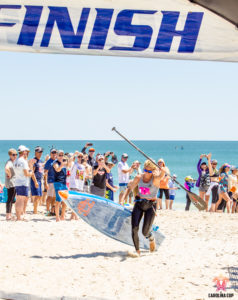 race and never looked back to win by 5 minutes over second place local paddler April Zilg.  While the chase Women’s group of April Zilg- 2nd, Jade Howson (3rd) and Fiona Wylde (4th) was working together most of the race,  Honscheid seemed to have a plan and just kept a steady pace and only increased her lead as the race went on threw the inner coastal and back out in the ocean.  To defend as a winner in the Graveyard race and even win is a feat in it’s own given all of the conditions that the race throws at the competitors.  The Carolina Cup Graveyard race has become a bucket list for all competitors to not only finish, but to win.  All races including the Harbor Island (3 miles), Money Island (6 miles) should be on everyone’s list of races to attend. 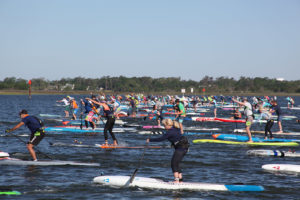 The Carolina Cup, like all WPA sanctioned races provide races for all abilities so everyone can compete and have a great experience.  Here are the results from the Harbor Island and Money Island races:

The kids races are showcased during the Carolina Cup that may very well produce the top paddlers of the future in our sport!  The Elite athletes that included Sonni Honscheid, Michael Booth, April Zilg, Daniel Hauslyo and Fiona Wylde took part to help cheer on the Junior paddlers and give them tips. 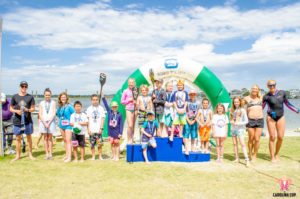 The US Cup features all the premier events across the US, boasting premium qualifying points and prize-money to provide an inclusive and ideal qualifying platform for aspiring athletes across the globe with the next WPA US Cup Series race, the Salt Life Columbus Cup on May 4, 2019 in Columbus, GA.

The Top 5 Men and Women from the US Cup will qualify directly for the 2020 APP World Tour, with spaces opening up to the next in line for athletes outside of the Top 5 should existing and qualified APP World Tour Athletes finish in the Top 5 on the US Cup. Here is the full US Cup Series schedule:

Please find below link the points standings for the WPA US Cup Series and the with the US Cup Series champions to be crowned at the season’s end.  Look for updates at www.appworldtour.com and www.worldpaddleassociation.com.