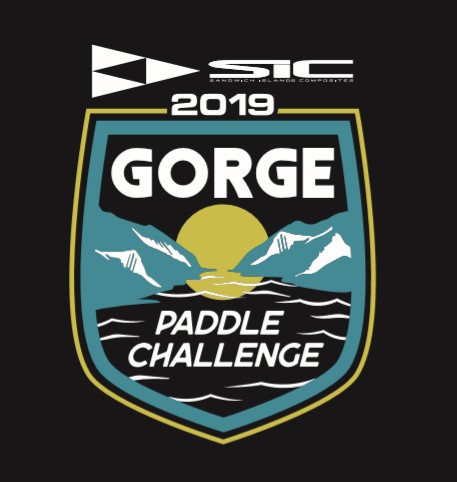 The 2019 SIC Gorge Paddle Challenge provided epic conditions while giving the spectators exciting action on the water in all races.  For the 9th year in a row, Hood River, OR did not disappoint with mother Columbia Gorge river providing solid 28-32mph winds both days with the 7 mile downwind race on Saturday and the 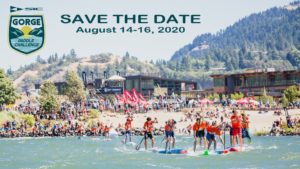 course races on Sunday.  The event was capped off with an exciting relay race with the Elite and Junior competitors teaming up on identical SIC 12’6 boards that will serve as the One Class design for future events.  Ultimately, Fiona Wylde from Hood River, OR and Noic Garioud from New Caledonia won the overall SIC Gorge Paddle Challenge Waterman and Waterwomen awards for their total combined times in the Elite double downwind and course races.

The SIC Gorge Paddle Challenge that is conducted in Hood River, OR for the ninth straight year is one of the bucket list races to attend for everyone.  This is one of most unique locations given that the wind blows up river and the current goes against the river causing great bump for the downwind races. The course races are conducted at the event site in a more protected area from the wind and current allowing competitors of all abilities to have a great experience with great competition.  The event includes the 7 mile Downwind races for all divisions including OC1, OC2, Surfski, and Sup Foiling and then the course races on the event site for all divisions.  This years event had 18 Sup Foiling competitors, most likely the largest Sup Foiling race to date in the world.  The Elite divisions run the downwind course twice and the Open and Junior divisions run one lap. 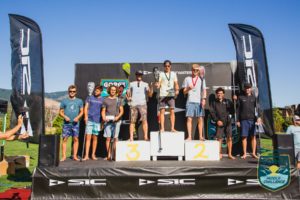 The town of Hood River has so much to offer with great food, people, hiking, biking, world class windsurfing and kiteboarding.  There is a good reason why competitors and families spend a week during the event to enjoy the community and everything that Hood River has to offer.

The Women’s Double Downwind Elite race was dominated by local girl Fiona Wylde who won both races over second place Annie Reickert by almost 5 minutes total.  The Men’s Double Downwind Elite race was won by Conner Baxter by only 17 seconds combined total time over Noic Garioud that included about 10 lead changes between the two on the second lap.  The competitors in the downwind race were greeted with a solid 22-24mph winds in the first race and then with some of the best conditions ever for the second lap increasing to 28-32mph with gusts up to 38mph.  Competitors are frequently getting 12-20 second runs on the wind created waves that can reach waist high in some areas of the river. 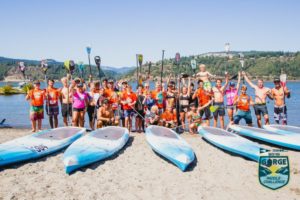 The course races were run on Sunday this year (days may change based on the wind conditions) that begins with the Groms & Super Grom races, Juniors, Open, Elite and then the always fun SIC relay race conducted on identical SIC 12’6 boards that highlights the end of the event with the Elite competitors teaming up with the Junior paddlers for a great experience paddling along side their hero’s in the sport.  Noic Garioud set himself apart from the Men’s field by taking first in the Elite course race by 1:23 min/sec over Connor Baxter in second.  This gave Noic the overall Watermens title since he made up the 17 second deficit that Conner held from the double downwind races. 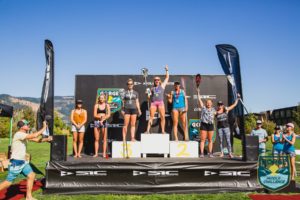 In the Women’s Elite course, April Zilg earned her first major title win over second place Sey Chelle by just 20 seconds.  April, arguably the hardest working paddler in the world, earned a well deserved victory after all of her close finishes the last seven years.  April also took the OC1 and Sup divisions victory in the prior weeks event at Hood River.  The high finishes for April at the SIC Gorge Paddle Challenge allowed her to take the points lead in the WPA U.S. Championship Qualifying Series sanctioned by the APP World Tour (standings listed below) over Jade Howsen.  Conner, with his 1-2 finishes also took the points lead on the U.S. Championship Series over Josh Riccio with the finale at the APP New York SUP Open on September 4-7th on Long Island.

Full event results and the Elite overall can be found on the below links in all races and divisions:

The updated points standings for the WPA U.S. Championship Qualifying Series can be found on the below link and to crown the Series champions at the season’s end New York SUP Open.  Look for more information and updates at www.appworldtour.com and www.worldpaddleassociation.com.