Izzi Gomez takes top honors at the Salt Life 2019 Carolina Pro-Am in Wrightsville Beach, NC presented by South End Surf Shop.  The worlds top Sup Surfers, Mo Freitas, Izzi Gomez, Colin McPhillips and the Grant Brothers took center stage on the final day which provided perfect conditions for the epic finish that took place to the enjoyment of all of those in attendance. 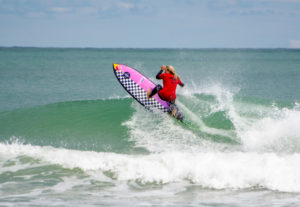 own for the Carolina Cup Race that has taken place since April 2011, has also hosted the Carolina Pro-Am Sup Surf contest since 2014.  The preliminary rounds began on day one of the contest in 20+ knot, side shore winds and overhead waves.  Competitors that advanced in the Juniors 17U, Open and Pro Open & Longboard divisions, however , were rewarded with 4-5 ft offshore conditions for the final day of competition.

The Carolina Pro-Am was started as a contest to appeal to a broad range of competitors and to reward those with a wide range of surf skills. This contest has divisions for all ages; divisions for shortboard and longboards; divisions for amateurs and professionals; and the combined overall trophy to the surfer who takes top honors in both the Pro Open and Longboard divisions.  This years event included $15,000 in prize money and the top 2 Men’s Pro Open and top 2 Women’s Pro Open competitors qualifying into the APP World Tour New York SUP Open on August 31-Sept 5th, 2019.

Mo Freitas took top honors in the Men’s Pro Open division over Fisher Grant who displayed very consistent surfing in the finals.  Mo won by the closest of margins over Grant 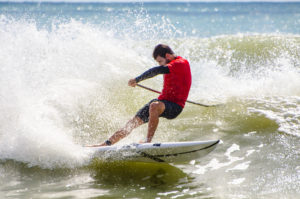 Since 2014, the Carolina Pro-Am has honored the competitor who had the the highest finish in both the Pro Open and Longboard divisions with the “Haywood Newkirk Sr Trophy” given the namesakes history in Wrightsville Beach.  Since the Women were only offered a Pro Open division in past years, the event directors decided to include a separate Longboard division for the Women in order to afford them the opportunity to win the overall title and the additional prize money that comes with it. Izzi’s historic first place finish in both the Women’s Pro Open and Longboard divisions trumped strong performances by Colin McPhillips (1st Longboard/3rd Open) and Fisher Grant (2nd Longboard/2nd Open) on the Men’s side. Izzi won the overall title and took home $3,750 in prize money.  Izzi’s performance at the Carolina Pro-Am was unprecedented winning both divisions and was allowed the opportunity to compete with the men on an equal playing field.

In the Open divisions, Maximillian Torres and Elle Newkirk took top honors in the 17U; Joel Jimenez and Sherry Correl in the 18-49; and Haywood Newkirk and Nancy 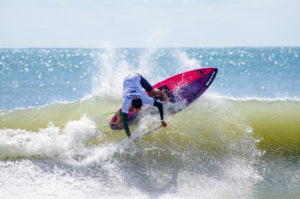 Salter in the 50+ divisions.  The Carolina Pro Am also held the first ever Sup Squatch Division with 5 teams showing form and exciting wipe outs that kept the crowd on the beach entertained during the finals break.