The 2019 Salt Life Columbus Cup provided the most unique Elite-Pro course format in all of stand up paddling May 4th in Columbus, GA with Conner 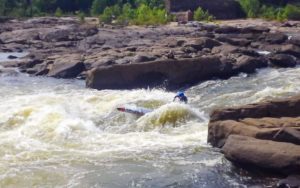 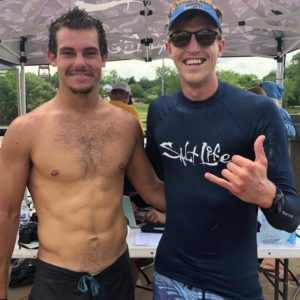 Connor and Yuka Sato from Japan topped both the Men’s and Women’s races and receiving $6,000.00 each of the total $27,000 in cash being offered to the Elite-Pro competitors with equal pay for Men & Women to sixth place.  While Connor held off Mo Freitas for the win, Yuka had to contend with April Zilg the 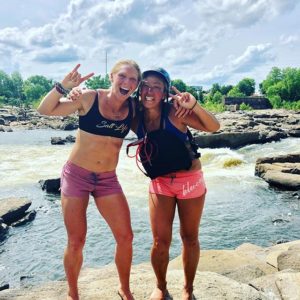 entire four laps that came down to the second to last buoy turn on the final lap.  April held the lead throughout the first two laps with Yuka in close pursuit, then April had difficulties navigating the rapid section on the third lap that allowed Yuka to pass.  April fought her way back in the last lap coming into the “M” buoy section with only two more buoy’s turns.  Yuka, having a one board length advantage going into the second to last buoy turn, April tried to squeeze the nose of her board to the inside of Yuka and caused Yuka’s leash to get caught on the nose of April’s board.  Both paddlers had to stop and try to remove the Yuka’s leash from the nose of April’s board that allowed Yuka to burst away and claim a seven board length victory over April (USA) in second, Laura Quetglas (Spain) third and Shelby Taylor-Jimenez (Mexico) in fourth.  The Men’s top four finishers behind Conner (Haw) were, Mo Freitas (Haw) second, Javier Jimenez (Mexico) third and Quique Hurtado (Spain) fourth.

While the Elite-Pro competitors had a challenging course, the Salt Life Columbus Cup provided a fun 1 & 3 mile course for the Open and Junior competitors with little or no current to contend with during their races.  The Open races were set up so all abilities could have a fun competitive course with an up river paddle to a buoy and another buoy at the lower portion of the river with one lap on the one mile race and three laps for the three mile race.  All of the competitors 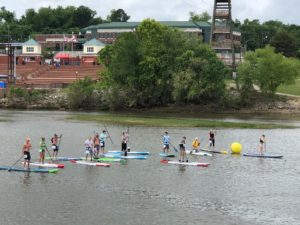 In an effort to help grow the sport of stand up paddling, the WPA and SIC have developed the “ONE CLASS” with identical boards provided for all participants to compete in a one mile fun race.  The goal in this first event with the SIC One Class is to offer the format to select races in 2019 and develop the One Class for the best growth of the sport that SIC will provide identical 12’6 x 30″ wide touring boards to give the paddler a nice glide with very good stability.   Paddles and PFD’s will also be provided so anyone that wants to compete can show up and paddle without bringing or owning their own equipment.  Heat races will be be offered to those that register and awards given to the top Men’s, Women’s, Boys and Girls divisions.  Look for more details with future events, go to www.sicmaui.com and www.worldpaddleassociation.com.

Here is the top placing Open & Junior competitors and the SIC One Class:

SIC One Class- One Mile

The Salt Life Columbus Cup was the second event in the WPA U.S. Cup Series, sanctioned by the APP World Tour that features the premier events across the U.S., boasting premium qualifying points and prize-money to provide an inclusive and ideal qualifying platform for aspiring athletes across the globe.  The next WPA U.S. Cup Series race is the Olukai Ho’olualea on June 9, 2019 in Maui, HI on the famous Maliko Downwind Run.

Please find below link the points standings for the WPA U.S. Cup Series and to crown the U.S. Cup Series champions to be crowned at the season’s end Battle of the Bay.  Look for more information and updates at www.appworldtour.com and www.worldpaddleassociation.com.